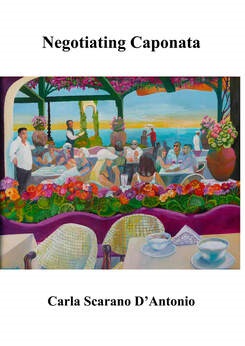 “Food is so important in Italy for our identity. It shapes our relationships. And it is also a way to renew them.” With these words Woking Writers Circle member Carla Scarano D’Antonio introduced the launch of her short poetry collection, Negotiating Caponata, on Zoom – an occasion attended by dozens of friends, family and poets, from Italy, Canada, and even Australia.

The event was warmly and ably hosted by Janice Dempsey, of Carla’s Guildford-based publishers Dempsey & Windle.  Carla’s collection is indeed about food, and abounds with lip-smacking recipes; but it is also about family history, a father’s final days, a mother and her cyclamens, and an acute assessment of the seasons. She had generously invited 19 poets to take part in an open-mic accompanying her reading. They included fellow WWC members Heather Cook, Liz Lennie and Greg Freeman, and a number of regulars who read at Write Out Loud Woking poetry nights. But there were also poets from the north-west of England, where Carla used to live and read her poetry before moving to the Woking area, and from Canada, which Carla has visited while pursuing her PHD research into the work of novelist and poet Margaret Atwood.

Those Canadian poets included Josephine LoRe, whose parents are from Italy; and Pam Medland, who met Carla when she visited Calgary, and read a poem titled ‘Buffalo Jump at Calgary Olympic park’.

North-west of England poet Keith Lander, who with Carla jointly won a poetry translation prize a few years ago, read a poem about a beach in northern Italy. Another poet Alex Josephy, who usually spends a lot of her time in Italy, has been stranded in England during lockdown. Her poem was ‘Leaving Italy’. Fellow WWC members Heather Cook and Greg Freeman contributed poems about Verona and  Bagni di Lucca respectively, while Liz Lennie gave us a series of haiku, including one sequence that she titled ‘Five-course Italian meal’, a response to Carla’s collection.

But what of Carla’s own poems?  She gave two readings, at the beginning and end of the evening, commencing with the title poem ‘Negotiating Caponata’, a poem that appears to be about a recipe, but contains more enigmatic lines such as “The aloofness at times” and “The body has no protection / when the light dims”. Suppressed feelings are bubbling under the lid in ‘Cooking betrayal’, while ‘Farina Manitoba’ – “the land of flour” – anticipates Carla’s first trip to Canada.

‘Only a cake’ takes its title from a Margaret Atwood quotation, ‘Special carbonara’ has liquor as the “secret ingredient”, and ‘When I was leaving’ is a sequence of poems about the seasons. Carla said her favourite season was autumn: “I was born in November.” During Carla’s second reading we glimpsed old family pictures to assist us with poems such ‘Grandad Ciccio and Grandma Orsola’ and Mum during the war’, and heard poignant poems about her father’s final days in hospital.

She grew up in Rome, gained two degrees at La Sapienza, the University of Rome, and moved to England about 14 years ago – first to the north-west, where she obtained an MA in creative writing at Lancaster University, and read poetry at venues such as the Spotlight in Lancaster. She moved to Surrey around six years ago, and quickly became a regular at local poetry venues. She has published her creative work and reviews in number of print and online magazines.

She is also an artist, and you can find motifs by Carla within her collection. The attractive cover illustration, Cappuccino in Positano, is by her publisher, Janice Dempsey.

You can order a copy of Negotiating Caponata here

or from Carla herself here