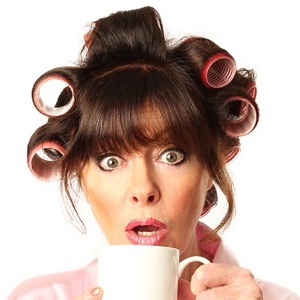 As a child, I remember my aunties as big-bosomed bundles of middle-aged spread, wearing unflattering clothes (well, that could have been something to do with seventies fashions), whose main form of excitement came from knitting patterns, Tupperware parties and the arrival of the latest Littlewoods catalogue. Feminine identity was never discussed, except for dark references to ‘going through the change’, which, in my understanding, meant it wouldn’t be long before the blue rinse perm look took over, and you aspired to look like the Queen Mother.

How things have changed. Now middle-aged women are trendy, beauty-conscious, thrill-seeking, party-going, Prosecco-loving menopause fighters, unafraid to speak freely about emotions, hormones, sex and pretty much everything else. Fuelled on chocolate and Prosecco, sisters are very much doing it for themselves these days, and that is what ‘Hormonal Housewives’ is all about, although, to be honest, I didn’t know quite what to expect from this one night only performance.

The auditorium at the New Vic was predictably packed with a largely middle-aged, giggly, chatty female audience. And a handful of brave men. If they thought they could remain incognito, then their hopes were dashed within five minutes of the performance, as the three women sharing the limelight on stage – Vicki Michelle (‘Allo ‘Allo), Jo Partridge and Julie Coombe – called for the house lights to be turned on, to take a good look at who was in the house. You could feel the men burying themselves into their seats, even if you couldn’t see them. It was, however, not to be a man-bashing type of show, as the humour relied firmly on being a modern, mature woman.

Neither cliched or predictable, the performance was fast-paced, funny, swiftly moving on from the opening scene which, with a living room set, appeared to be the start of an amusing ‘girls night in’ scenario. With plenty of audience eye contact, a short scene of one-liner jokes followed which got everyone laughing, and with the fourth wall down, the bonding between actors and audience was cemented. The waxing scene at the end of the first act left most of the audience crying with laughter. The second act continued in the same vein; we were unsure what to expect next, but each scene provided something that all the female audience could identify with.

The script by Julie Coombe and John MacIsaac was witty, light-heated and fresh, and the rapport between the actresses was strong. The Vagina Monologues it certainly wasn’t, but it was a simple celebration of womanhood, with no holds barred. I’m not sure what my aunties from the seventies would have thought of it, but maybe it would have tempted them to swap the Tupperware for an Ann Summers party instead.