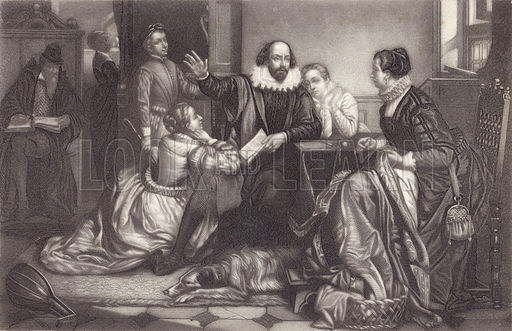 It was a hive of activity in the kitchens of The New House on the High Street in Stratford-on-Avon that morning.   The date was Saturday, 23rd of April 1604, and it had only been a few weeks since, largely due to the success of his last play Macbeth, that the Shakespeare family had bought and moved their family from the cramped cottage in which they had been living with their three children into this larger and well-appointed house in the High Street.  Today was a special occasion and Anne had been busying herself since five-thirty in the morning preparing a feast to celebrate her husband’s 40th birthday and the forthcoming production of his next play, Julius Caesar. Even little Judith was helping but, as for Susanne, although at fifteen you would think that she would have been a real help to her mother she had recently fallen madly in love with the young John Hall from down the street, so her mind was elsewhere and Anne had to keep chiding her for forgetting what she was meant to be doing.  The guests had been invited for lunch at 12.00: A capon, a turkey and a duck were all bubbling away on the range and Anne was preparing bowls of pottage from her Mother’s recipe.   Lissette, the maid, had already been dispatched to the bakers to get ample supplies of bread, the vintner had arrived with casks of beer, plenty of mead and a bottle of malmsey for the toast and the fishmonger’s boy had delivered a half-barrel of oysters.  All was seemingly well under control while William as usual, was working away in his study on his latest play when the first guest arrived unexpectedly.

Lisette was dispatched upstairs to tell William they had a visitor and, as she entered the study, William put down his pen and put his arms round her waist ‘Come here you buxom wench’ he quipped, ‘Shall I compare thee to a summer’s day?’ ‘You can if you want to’, replied Lisette brushing his hands away, ‘but not now, I’m busy.  All I’ve come up to tell you is that Francis Bacon has arrived early and says he’s got the outline of a couple of new plays you might like to write’.

‘Better three hours too soon than a minute late,’ William said, thinking as he said it, what an excellent line that would be for his next play. ‘Tell him I’ll be down directly.   Meantime, give him a glass of mead but only one mark you and don’t let him fondle you – he can’t handle his drink.  The last time he was here, after a couple of glasses, I noticed he was all for having you behind the settee in the withdrawing room.’

No sooner had she gone back downstairs that Hamnet knocked on the door.   ‘Enter’ William called out and on seeing his son continued, ‘My son, What ho, what ho, what ho’ reminding himself of a line from his play Othello. ‘Father, I need a couple of groats’, Hamnet explained, ‘there’s a girl in the village I’d like to take to the cock fight this evening.’   ‘Certainly not,’ replied William ‘if you want some money go and earn some by working on your grandmother’s farm.  Money doesn’t grow on trees you know and how many times have I told you neither a borrower nor a lender be’ – the words were hardly out of his mouth before he jotted them down as another good line to bring into one of his plays.  ‘Now, be off with you for I must make myself ready and join your mother downstairs and, Hamnet, before you start throwing your money around, a word of caution, don’t waste your love on somebody who doesn’t value it.    No decent girl wants to see a cock fight.’

‘Is this a dagger I see before me?’

With that he went down to the kitchen and clasping his wife by the hand whispered into her ear.  ‘From fairest creatures we desire increase.’ ‘Judging by the number of children we already have William, we’ve increased enough as it is,’ admonished Anne in reply, ‘now be off with you and leave us alone while we finish getting the meal ready.  Our guests will be here soon and there’s still much to do.   Meantime, go and talk to Francis.  And, with a brief ‘methinks the lady doth protest too much’, William took himself off.                            So, leaving Anne, Lisette, Susanna and Judith busying themselves in the inside kitchen he poured himself a glass of beer and went in to talk to Francis.   ‘The play’s the thing, eh Francis?  Have you something good for me?’   ‘This is a humdinger Will,’ promised Francis, ‘it’s set in Denmark and has a ghost and a young girl committing suicide and lots of people stabbing each other in the back.’  ‘Sounds like our king’s court, Francis,’ said William with a laugh, ‘but I like it.  I could bring in an idea I had the other day.  Someone standing up and saying ‘To be or not to be, that is the question’.’  ‘That’s good, Will, what was the question?’ asked Francis.   ‘I haven’t quite decided that’, answered William, ‘but I think spoken by the right person it will be a showstopper.’

‘You certainly have a way with words.’ Francis couldn’t keep the admiration out of his voice. ‘When are you next off to London?’   ‘Tomorrow and tomorrow and tomorrow,’ replied William.  ‘Good’, said Francis, ‘meantime any chance of some more of this excellent mead, Will?’   But before he could pour his guest another glass the other guests started arriving; Adrian Quiney was the first, then William’s mother Mary from the farm with a basket of eggs, then Ben Jonson, then Thomas Greene, then John Hall, at the sight of whom Susanna’s face went all pink as he kissed her on the lips and slid his hands over her blouse, then Thomas Russell, then some friends of Hamnet’s and, finally, a crowd from the theatre.  When they were all gathered Anne came out and announced: ‘Luncheon is ready, come through into the kitchen.’

The first thing they saw as they made their way in was a decorated cake with forty candles on it sitting in the middle of the table. ‘Right, let’s cut the cake and sing ‘happy birthday’,’ she told them as she handed William a knife.  ‘Is this a dagger I see before me?’ he said – never one to miss quoting a line from one of his plays. ‘No’ chided Anne,’ it’s just the cake knife’ and they all had a good laugh.

So the meal progressed and as more of the beer and mead were consumed so did the talk get more raucous and at times rather crude, so much so that eventually Anne had to tell Judith to go up to her room.  Later Anne declared, ‘Right, it’s time for the toast’ as glasses of malmsey were handed round and a toast to William was proposed.  After that someone called out ‘Speech’ and William got to his feet.  ‘Friends, Romans and countrymen’. ‘Who are you calling Romans?’ called out Ben Jonson.  ‘I know you’re not Romans, idiot,’ responded William, but I’ve just written that line into my new play and I wanted to see how it sounds.’ ‘Enough of speeches’, exclaimed Adrian, downing about his tenth goblet of beer, ‘let’s have a song.  Susanna, sing us one of your dad’s songs.’  So Susanna got up and said she’d sing ‘Oh Mistress Mine’ from Twelfth Night.  ‘Well, if music be the food of love play on,’ murmured John to no one in particular, ‘give me excess of it’.  ‘That’s very good John,’ acknowledged William, ‘may I use it?’   ‘Yes, of course’, agreed John and Susanna got up and sang a few songs and the party continued in happy mood until well past five o’clock.  ‘Haven’t you all got homes to go to?’ taunted Anne as by then it was getting dark and most of the food had gone.  With that, the guests gathered their cloaks and made their way out.

‘Thank you sir, thank you Anne’ John said as he left and blowing a kiss to Susanna, ‘parting is such sweet sorrow’.  ‘You’re certainly coming out with some good lines tonight John,’ said William at the door, ‘’I must write that down before I forget it.   Now be off with the lot of you.  Not you Francis, I want to hear some more of your ideas for this Danish murder play.  I might call it Hamnet, after my son.  Hamnet, Prince of Denmark.  No, that’s not right.  I’ve got it, Hamlet.  Hamlet, Prince of Denmark.  Yes, Francis, Hamlet it shall be.”